What have been the impacts of EU’s renewable energy policies on forests?

Ahead of crucial times at the European Parliament for climate change and forests, the NGOs Fern, Birdlife Europe and Transport & Environment are presenting a new study that gives new insight to the impacts of the Renewable Energy Directive on Europe’s forests. 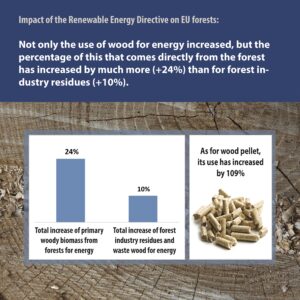 The study contains new data that confirms the fact that the LULUCF regulation has to ensure honest accounting of emissions and removals from forests and the Renewable Energy Directive must ensure that bioenergy doesn’t create such emissions in the first place. The negotiations over amending the proposal for a Renewable Energy Directive in the Parliament are about to start and the final position of the Parliament on the LULUCF regulation will be voted 11 July.

According to the new study the use of wood for energy has increased by about 75 million cubic meters over the past five years – equal to Sweden’s whole annual harvest which is the EU’s biggest. And an increasing share of this wood is actually coming directly from the forest – a 24 % increase compared to the use of forest industry residues which is only 10 % since 2010.

This means that renewable energy targets are actually increasing harvesting pressure on forests, rather than just tapping into ‘unused’ resources that don’t have other important functions.

The results of increased logging can be seen in the declining carbon sequestration capacity of EU’s forests. Instead of keeping the forests so that they can take up CO2 form the atmosphere, EU member states are harvesting them and reducing the amount of CO2 that can be taken up from the atmosphere. 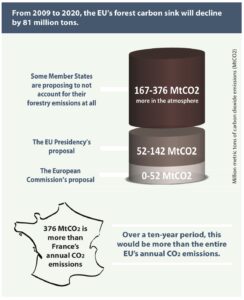 This has caused EU’s forests to sequester annually 24 million tons less of CO2 than at the start of the Renewable Energy Directive and is further projected to drop by 57 million tons by 2020  – making 81 Mt CO2, the equivalent of Romania’s CO2 emissions.

Based on these discoveries, to make sure that the EU’s forests can do their critical contribution to climate change mitigation and that renewable energy targets don’t hamper efforts to reduce carbon in the atmosphere, NGOs make the following recommendations:

To protect nature and the climate, we must reform how the EU treats bioenergy