Bioenergy Carbon Capture and Storage (BECCS) is increasingly promoted as a means of removing large amounts of CO2 from the atmosphere. It involves capturing CO2 from biomass-burning power stations or biofuel refineries and burying it underground. The concept is based on the highly contentious belief that large-scale bioenergy is carbon neutral and that sequestering CO2 emitted during biomass burning or refining will make the process carbon-negative. Biofuelwatch just released a new report showing there is no real evidence for large-scale carbon-negative BECCS than there is the existence of carbon-sucking aliens.

The only existing BECCS projects involving capturing CO2 are from three corn ethanol refineries in the US. In two of these cases, CO2 sequestration is combined with Enhanced Oil Recovery (EOR). Around 30% of the CO2 injected underground is released again in the process and once this is added to the carbon contained in the additional oil which is being recovered, the climate impacts will likely be worse than without carbon capture. The third project is part of a US government carbon sequestration trial, but is clearly not carbon negative either: carbon emissions from fossil fuel burning to power the ethanol refinery are higher than the amount of CO2 that is actually captured.

Other BECCS technologies have never been demonstrated, however the report looks at similar technologies which have been tested to capture CO2 from coal power stations. These are highly complex, expensive and failure-prone technologies. Today, only one commercial scale coal CCS project exists in Canada, and so far it has not operated successfully. Even if it did, it would not financially break even throughout its life-span despite the fact that the CO2 is sold for EOR. There is no credible evidence that any BECCS technologies other than the very limited capture of CO2 from conventional ethanol refineries will ever become financially and technically viable. 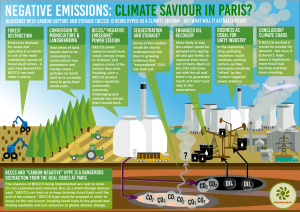 BECCS is being hyped as a climate saviour, but is it?  (c) Biofuelwatch

Biofuelwatch’s report further explores the question whether large-scale carbon negative bioenergy would be possible in theory (i.e., if BECCS technologies have been proven) and reveals some very problematic assumptions on which this concept is based – for example the assumption that converting large areas of natural grasslands to energy crops is ‘carbon neutral’ when scientific studies show that it results in very substantial upfront carbon emissions from soils and lost vegetation.

Only one peer-reviewed article looks at the land, water and fertiliser requirements of a large-scale BECCS programme. It shows that a BECCS scheme designed to sequester 1 billion tonnes of carbon from the atmosphere every year would require converting up to 990 million hectares of land to energy crops, using up to 7.4 trillion cubic metres of water per year for irrigation, and increase global nitrogen fertiliser use by 75%. This would likely release more than three times the CO2 equivalent of nitrous oxide (a very powerful greenhouse gas) than the amount of CO2 that would be sequestered through BECCS.

With climate change looming on the horizon there is no doubt that the world would be a safer place if we could reduce the amount of CO2 we are releasing into the atmosphere while phasing out fossil fuel burning. But this is no more an argument for BECCS than it is of the ‘need’ for carbon-sucking aliens.

The European Parliament made it clear: Stop promoting biofuels that cause deforestation!

Bioenergy and Europe’s quest for a ‘circular economy’

Global biomass accounting and the mysterious case of the missing emissions