The European Parliament made it clear: Stop promoting biofuels that cause deforestation!

MEPs don’t want to see biofuels that cause deforestation being used within EU borders, and they want them out of the EU market as soon as possible. They’ve asked the European Commission to do so through a report on palm oil and deforestation of rainforests – led by Katerina Konečná MEP -, adopted by the European Parliament on Tuesday 4 April.

The report covers plenty of environmental, social and climate issues linked to the mass use of palm oil for various markets, such as food, cosmetics and biofuels. The MEPs are calling for improved sustainability certification and verification schemes as well as deforestation-free supply chains in global vegetable oil markets. But on the matter of biofuels, MEPs are making an unprecedented call that goes well beyond the palm oil issue.

The lead MEP, backed by an overwhelming majority in the European Parliament, said that 46% of palm oil imported by the EU is used for biofuels and its production requires about one million hectares of tropical soils. The Parliament has now called on the European Commission to phase out the use of vegetable oils that drive deforestation, including palm oil, as components for biofuels preferably by 2020.

Why is this important?

It’s not a secret that mass-scale production of unsustainable palm oil drives an increase in greenhouse gas emissions (GHG) released in the atmosphere, through deforestation, peat drainage and land-use change. What is less known is the fact that the demand for palm oil to produce biofuels (ie, biodiesel) in the EU has ramped up in recent years. In 2015, 46% of all palm oil imported in the EU was used in our cars and trucks, compared to 2010 when only 8% was used for transport. This is a six-fold increase in five years. This increase is thus a key driver of  palm oil production and doesn’t help the situation in the tropical rainforests. When you take into account the full life-cycle emissions of palm oil biodiesel, its emissions are actually much higher (three times) than the fossil fuel it is supposed to replace.

If palm oil is not used in biodiesel anymore, is the problem gone?

And here is where the beauty of this European Parliament’s report lies: the most common vegetable oils that we use to produce biodiesel are rapeseed, palm oil, soy and sunflower, and all of them do cause deforestation due to indirect land-use change, leading to higher GHG emissions than fossil diesel.

That’s why the solution to the problem involves phasing out as soon as possible all vegetable oils that drive deforestation as components of biofuels. We welcome the fact that MEPs acknowledge this. 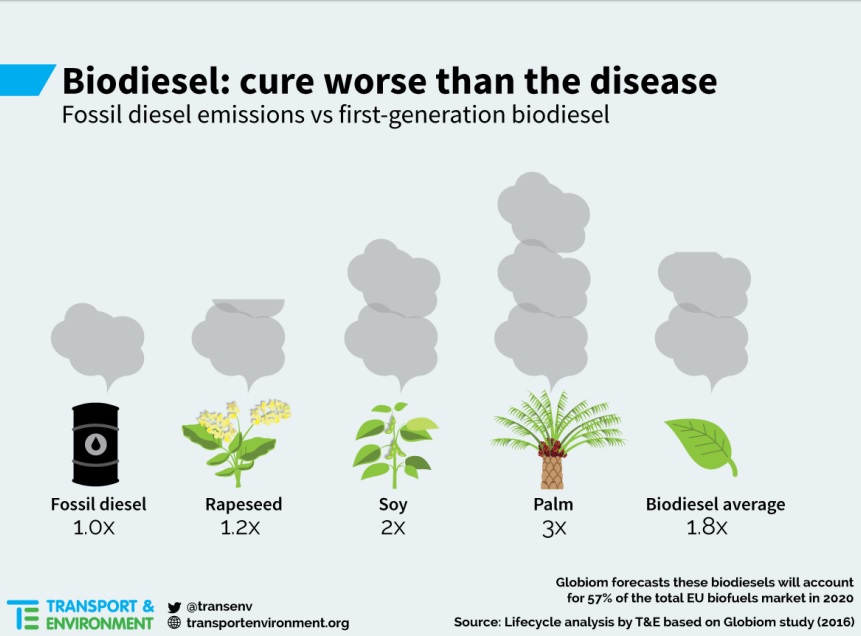 A great signal for the future

If policymakers finally take unsustainable biofuels out of the picture we will no longer be using fuels that are more harmful to the climate than fossil fuels. Also, we will be leaving room in the EU market for truly clean and sustainable options, such as sustainable advanced biofuels and renewable electricity.

But hold on, this is not a victory yet. Now MEPs need to make sure that their asks are taken into account in the discussions on the recast Renewable Energy Directive – aka, RED II – as this piece of legislation will actually regulate how biofuels are supported in the EU after 2020.

The RED II proposal was released in November 2016. When it comes to unsustainable biofuels, it’s not quite aligned with what the European Parliament wants: the European Commission proposes to still allow a maximum of 3.8% of crop-based biofuels (which include vegetable-oil based biodiesel) to count towards renewables targets in 2030. The Commission’s proposal is therefore less ambitious: a partial phase-out only and 10 years later than what the Parliament wants. In other words: it doesn’t go as far as phasing-out completely all land-based biofuels by 2030, which is what T&E recommends.

The good news is that MEPs have a big opportunity to work on this proposal and get things right in the coming months. In an ideal world, the final text will include what the European Parliament has asked for. But, for that to happen, MEPs must remain committed to today’s report on palm oil and deforestation of rainforests. Transport & Environment will certainly do its best to make that happen.

Is the EC taking bad biofuels out of the picture?