Slovakia – Up in Flames

By guest author Fred Pearce, author and journalist – article from Fern’s report ‘Up in Flames’

He said he was a forest ranger. But he leaped out of an unmarked car and showed no ID before shouting at us and waving a heavy stick menacingly in our faces. The three of us, enjoying the afternoon sun on a short stroll through the woods, were trespassing in the Poloniny National Park, he said – a criminal activity. He harangued us for 15 minutes as we retraced our steps back to the main road. In Slovakia, the heavy machinery of logging companies is allowed inside its national parks – their work was all around us. But walkers often are not.

Slovakia is a sparsely populated country with almost half its land still forested. Wood is widely used for heating and construction: the famous wooden churches in the east of the country are UNESCO-listed. If anywhere in Europe can cope with more wood cutting to generate energy, then it would be here. But the signs of stress on the forests are everywhere.

In the Carpathian Mountains of eastern Slovakia, clear-cutting of beech forests is being driven by demand for biomass to generate electricity. Poloniny National Park, on the border with Ukraine and Poland, has the highest concentration of old-growth forests in the country. But logging is legal here and in Slovakia’s other national parks, provided it is licensed. All along the route into the park, EU funds are being used to widen the roads and improve access for heavy vehicles.

A grassroots NGO called WOLF, which campaigns to protect Slovakia’s forests and their large populations of wolves, bears, bison and lynx, calculates using government statistics that ten million cubic metres of wood are logged each year from the country’s forests, while it estimates the sustainable yield at only around six million cubic metres. With around 3.5 million cubic metres being burned for energy and heating, this sector represents almost the entire overharvest.

Campaigners such as WOLF say they have no objection to community-based biomass burning schemes, such as a project around the village of Banska Bystrica in central Slovakia, which has replaced imported coal with local wood chips.1 The assault on the country’s forests, they say, is driven not by such local activities but by huge subsidies paid by the government to a new generation of large biomass-burning power plants. 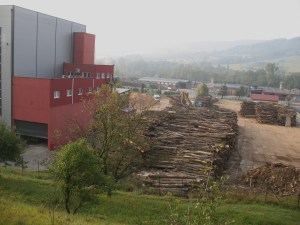 There are now around a dozen biomass power and heating stations scattered across Slovakia. The largest, consuming 160,000 m3 of wood a year, is a former coal-burning plant at Vojany in the east of the country. There will be more. The government aims to meet 14% of its electricity needs from biomass by 2020, and to increase burning to 4.7 million cubic metres a year. This will seriously accelerate the rate of forest loss.2

The power stations are only supposed to burn chips made from low-grade timber not suitable for other industrial purposes. But the reality is different. Slovakia only produces around two million cubic metres of this low-grade wood every year, says Peter Sabo, a campaigner for WOLF. Most of that is used for domestic heating. So power stations instead burn higher-grade timber, paid for by government subsidies.

An hour’s drive from Poloniny, on the edge of the beautiful medieval town of Bardejov, an Austrian-owned power station has, since 2010, been burning 100,000 cubic metres of wood each year to generate electricity and supply heat to the town. On the day I visited, the timber yard was full of large logs with diameters of up to one metre (see picture), some being chipped and placed in a large pile within metres of the plant. It was hard to believe these had no other potential industrial uses.

Sabo said: “The company has been convicted and fined for this, but the fines are low and they just carry on.” The company, Bioenergy Bardejov, denied that it owned the logs in the courtyard. Stanislav Legat, a manager, said “We only use chips… that is not our yard.”

WOLF has made a detailed study of eastern Slovakia. It has found that consumption of timber for biomass burning is now over 1 million cubic metres – twice the available supply of low-grade timber.3 “Behind these numbers lie destroyed natural ecosystems, places where wolves, bears, deer and others had their quiet places without human intervention,” says Sabo. “In Slovakia, wood burning for energy is not a renewable resource.”

Biodiesel: a cure worse than the fossil disease

Between sovereignty and extraction, bioenergy in rural areas

Photoblog: a story of southern destruction