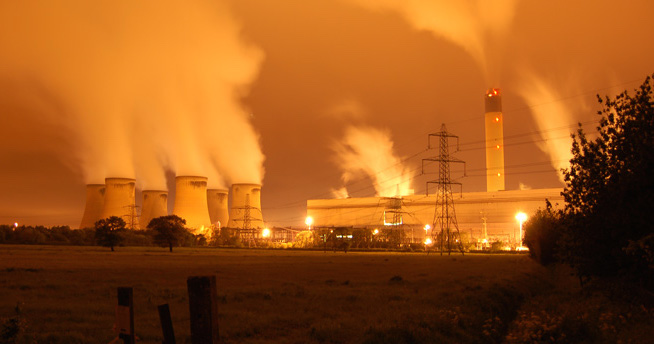 By guest author Fred Pearce, author and journalist – article from Fern’s report ‘Up in Flames’

Drax is one of Europe’s largest power stations. Its 12 giant cooling towers dominate the landscape of the Trent Valley in eastern England. It generates up to 4,000 megawatts of electricity – meeting a tenth of the UK’s demand – and is one of the world’s biggest emitters of greenhouse gases, sending more than 23 million tonnes of CO₂ up its chimneys each year.

But since mid-2015, half of Drax’s fuel has come from biomass – mostly wood pellets. Next year, a fourth of its six generators will convert to burning biomass. By then, it will be burning seven million tonnes of pellets a year, requiring a volume of wood equivalent to the size of the Albert Hall in London every 1.5 days. It is the biggest biomass-burning power plant in the world.

None of the wood feeding Drax’s boilers comes from British forests. Most is imported from the south-eastern states of the US. Last year, the Drax company opened two new mills in Louisiana and Mississippi to convert pine logs into pellets for shipping to the UK. It is also importing hardwood pellets from other companies in North Carolina and Virginia, and will soon be burning more from another purpose-built facility in the southern Brazilian state of Rio Grande do Sul.

Drax is by far the biggest purchaser of pellets in the southern states, and in 2014 was responsible for around 60 per cent of all US wood pellet exports. Almost entirely because of Drax, Britain has become the largest importer of wood pellets in the world.

The precise consequences of this conversion from coal to wood for Drax’s carbon emissions are hotly debated. The power station itself emits as much CO₂ as before, since wood, like coal, is made of carbon. But the company argues that the emissions from burning wood pellets will be reabsorbed as trees planted in the harvested forests start to grow. It does not do the planting itself, but says that its suppliers will have an interest in maintaining a profitable business.

The company calculates that the energy used to process and transport the pellets is only a fifth as great as emissions from coal burning, so it boasts that the switch to biomass has cut its net emissions by 80 per cent. On that basis, the UK government is providing subsidies to recognise the company’s contribution to fighting climate change.

There are two potential problems with this. For one thing, even with prompt planting, the new trees will take between 35 and 100 years to soak up as much CO₂ as is emitted by burning the harvested trees. So, with more CO₂ in the air, there will be extra global warming during that time.1, 2

But even in the long run, some scientists say that net emissions could end up higher than they were before. A study in 2014 by scientists at the Department of Energy and Climate Change reckoned that, under a worst-case scenario in which the logged forest land was converted to agriculture rather than being replanted with trees, burning biomass at Drax could end up emitting two or three times more CO₂ than sticking with coal.3

But Drax denies this is what is happening in the US. “Far from reducing these forests, we will be contributing to their revival,” its vice-president for sustainability, Richard Peberdy, told me on a tour of forest stands in Mississippi. Far from denuding the forests, Drax’s demand for timber will encourage land owners to plant more trees than before.

We shall see. Meanwhile one thing is clear: the impacts of biomass harvesting on this scale will be dramatic for the ecology of the forests concerned, even if they are replanted. Drax describes its feedstock as “low-grade wood such as forest thinnings, tree tops and branches”. But on the evidence of my visit, most of the pine plantation “thinnings” that supply Drax’s own pellet mills are substantial tree trunks, six metres or more long and cut from forest stands after ten or more years of growth.

Drax insists that these thinnings are the incidental by-products of a forestry industry still primarily geared to producing high-value timber for furniture and construction. “As the lowest value product, we don’t influence harvesting cycles,” says Peberdy. But managers at Plum Creek, Drax’s biggest supplier and the US’s biggest forest owner, told me that by intensifying their forestry methods, they have increased the productivity of their southern pine forests by 50 per cent in the past 15 years. And they agreed that the market provided by Drax was accelerating this intensified forestry regime. Already, across the Deep South, genetically diverse pine forests that once regenerated naturally are being replaced with monocultures of genetically identical planted yellow pine.

Of equal concern for ecologists is the impact of Drax’s demand for timber on US hardwood forests, particularly in bottomlands and wetlands. Another major US forestry company, Enviva, harvests these oak and sweetgum forests in Virginia and North Carolina. It plans to supply more than a million tonnes of pellets to Drax in the next three years.

“The wood pellet industry is a growing threat to North Carolina’s valuable wetlands, forests and the life those ecosystems support,” says Derb Carter at the Southern Environmental Law Centre in Chapel Hill, North Carolina, which has campaigned against the industry. Scot Quaranda of another local NGO, the Dogwood Alliance, has tracked hardwoods clear-cut from the Urahaw swamp in North Carolina to a mill at Ahoskie, North Carolina, owned by Enviva and supplying Drax.4

Drax is required under British sustainability regulations to ensure no loss of forests or biodiversity from its operations. But, says Quaranda, “these kinds of operations do not care about biodiversity, ecosystem services or natural forests; they only care about fibre production.”

3 Stephenson and MacKay (2014). Report ‘Scenarios for assessing the greenhouse gas impacts and energy input requirements of using the north American woody biomass for electric generation in the UK’. Department of Energy and Climate Change, UK. https://www.gov.uk/government/uploads/system/uploads/attachment_data/file/349024/BEAC_Report_290814.pdf